The night before Tough Mudder I was in tears… I had lost my driving licence and the website clearly stated you need Government photo ID or you weren’t getting in … NO EXCEPTIONS! All this hard work, the fear, the training, the talk, the long journey up north and I wouldn’t be able to compete! I would be lying if I said there wasn’t a little part of me that felt like a huge weight had been lifted off my shoulders. Instead, I could visit the sites around Chester, spend the day reading the paper in coffee shops, stay warm and toasty by the fire in a country pub… some things are just meant to be?!

The alarm clock started screeching at 6am, Phil lying still and silent next to me refusing to believe he was being woken up at such an ungodly hour on a Saturday. A quick shower relishing the hot water as I imagined the cold to come and it was time to leave. I packed my bananas and we were on our way. We neared Chelmondeley Estate and I put on my favourite song ‘Avicci – Levels’ to pump up the adrenalin, I felt ready, EXCITED… and now absolutely dreaded them not letting me in without ID. As I queued up to get my starter pack I realised that not only did I not have proper ID I hadn’t actually signed the ‘death waiver’ and no one had a pen… oops! Luckily I got through with my Padi scuba license and an unsigned form… this alone made me feel better, maybe I could sue them when my heart stops in the ice cold water or I break my leg climbing over a 12 foot wall? As I met my team mates Kelvin, Justine and Lawrence, I was suddenly really excited and couldn’t wait to begin and was more determined than ever I would FINISH!

Before you even begin there is an obstacle to climb over, just to get to the start line, I struggled and needed a leg up and help the other side, drawing blood as I scratched my ankle on the way over. Not the greatest of starts.

Together we chanted the rules of Tough Mudder… 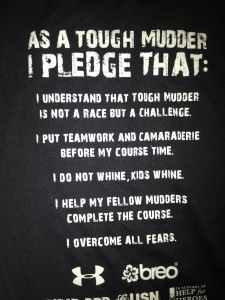 Then the whistle blew and we were off. 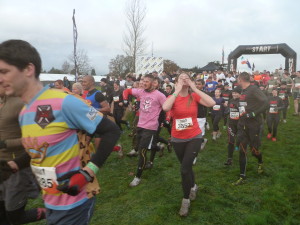 Five minutes in and I was already out of breath, my feet were covered in mud and I was crawling on my belly under barbed wire, they don’t call it TOUGH Mudder for nothing. The second obstacle was the one I assumed would be at the end. Jumping into a skip filled with ice and water, swimming under water and climbing out the other side. Remember this was a cold day in the middle of November, as we got out the rain started to fall and again we were reminded of the crazy adventure we had signed up for. 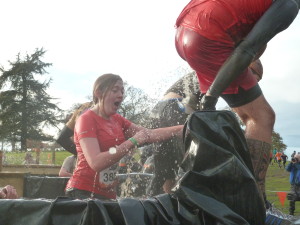 Running with sodden feet, through swamps and up slippery hills is not your average half marathon. Half way through and we had ‘played’ in mud baths, carried heavy logs round in a circle (why I hear you scream), climbed (with help) over tall wooden walls and scrambled through trenches and pipes filled with water. At the six mile mark I told my team mates I had never run further than this before ‘you chose Tough Mudder to be your first half marathon’ ‘YUP!’ The second half was even tougher, my hands had frozen, my feet had frozen, I had mud and dirt in places you wouldn’t think possible and my legs were close to seezing up… but I made it! I struggled through and after being dragged up hills, pulled over obstacles and pushed down pipes by my team mates I did it, I passed the finish line … and promptly burst into tears. The emotion was too much. So is Tough Mudder really that tough? My first thoughts would be YES, I ran through 200volts of electric shocks… twice! For days after I ached more than I’ve ever ached before and the people who surround you on the course are big, buff army types and you wonder… what the hell am I doing here!? But I made it… little ol’ me finished Tough Mudder, the girl who exercises once in a blue moon and would always choose an extra 20 minutes in bed over an early morning run. So it can’t be that Tough, it isn’t just for the toughest. If I can do it… you can too! I believe in you… you are a TOUGH MUDDER … so go on book your place, achieve more than you ever imagined, be extreme… Have you done Tough Mudder? Thinking of doing it? Is it tough enough??