If you are in India and you like wine … you are probably missing wine right now!

As a rule, the wine in India sucks.

Imagine 10-year-old vinegar, that has been boiled and frozen several times on its journey across the ocean from a decent wine brewing country only to be left at the back of a sweaty cupboard for a few more years until an uninformed tourist with cravings asks for a bottle of house white. I have made this mistake far too many times until I eventually stopped asking and started drinking beer!

So when I was told by a fellow wine loving Brit that there was a great winery only 3 hours from Mumbai that actually had good tasting wine … I was on the next train!

Sula wines in Nasik was set up in 1997 by an Indian engineer who had been working a high powered job in the USA. He quit his job to move back home and look into starting a winery, similar to those he had been enjoying in California. Shortly after Sula Wines was born and has since grown from 30 – 1500 acres of prime grape growing vinyards.

I headed to Sula with my Rickshaw Journey friend Patrick and instantly headed out to the winery with our rickshaw driver.

For 250 rupees you get a tour of the estate, followed by 6 wine tastings (well about 10 after I fluttered my eye lashes and asked for seconds) and you know what … the wine wasn’t half bad! In fact, it was bloody amazing! Whether this was because I haven’t tasted decent wine in 3 months or the Indian’s are finally capitalizing on the world wide wine market in style, I am not sure.

I recommend a visit to anyone who is in Mumbai and fancies a day or two-day trip out of the city. The train was only 85 rupees and a night in a decent A/C room is around 500rp.

Go on treat yourself! A chilled waft of juniper and blackberry washed down with after flavours of honey and lime is just waiting to touch your palate!

If you want a real Indian experience where almost no one speaks English (except at the winery) then Nasik is the place to go. There are only about 3 eateries in the whole town (listed in Lonely Planet) and you revert to communicating via hand signals, maps and the small amount of Hindi you may or may not have picked up. The usual cows roam the streets and children ask for you to take their picture as they dip their toes in the river.

Our rickshaw driver also invited us back to his house for Chai, where we met the family and again had lots of photos taken with grandma, baby, uncle, etc.

It is a great escape from the city, and with the local wine resort only minutes away … Go, go now! 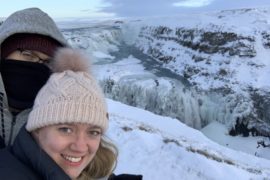