I was so impressed with Gdansk as a city, a holiday destination and a cultural hotspot. The architecture surprised me, the food was tastier than I had first imagined and shock horror… it was really hot!

It feels like every country in the world except the UK has seasons, cold snowy winters, flower filled springs and hot, predictably sunshine filled summers. I had always thought of Poland as cold, it’s in the name ‘Pole’ you think of icebergs and heaped snow, but come summer Poland is a sunshine filled country with hundreds of beach going tourists and suncream needed every day.

So with sunshine predicted all weekend, a jam-packed itinerary and two amazing hotels to visit I was more than excited about my adventure to Gdansk. Here are five of my top things to do during a weekend in Gdansk

The Black Pearl or Czarna Perla as it is locally known is a great way to learn about Gdansk’s long history. The starting place of WW2, a huge shipping port and still today one of the top places huge container ships come to be fixed. 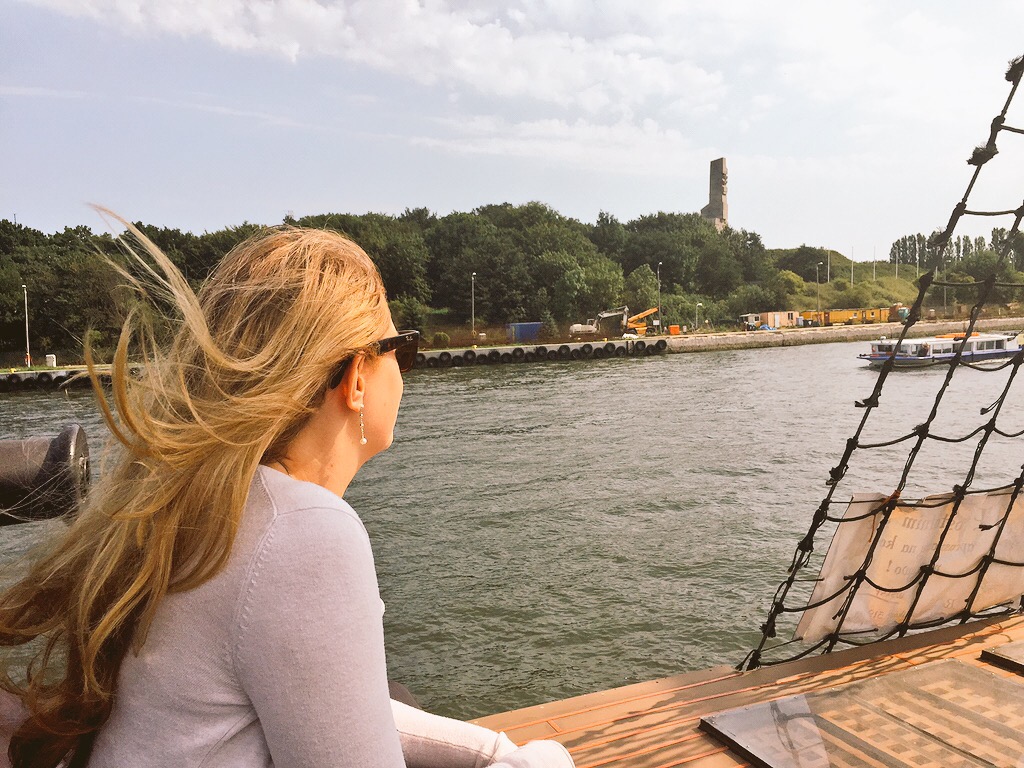 There is a multilingual guide on board the boat who will talk you through everything you are passing in Polish, German and English whilst you sit back and enjoy the mixed views. You sail through the port, which isn’t your typical gorgeous view, but the huge boats are a site to see, alongside the huge cranes that Gdansk is also famous for. You can get off the boat at the Westerplatte to have some time visiting the WW2 memorial or stay on board for the return journey. 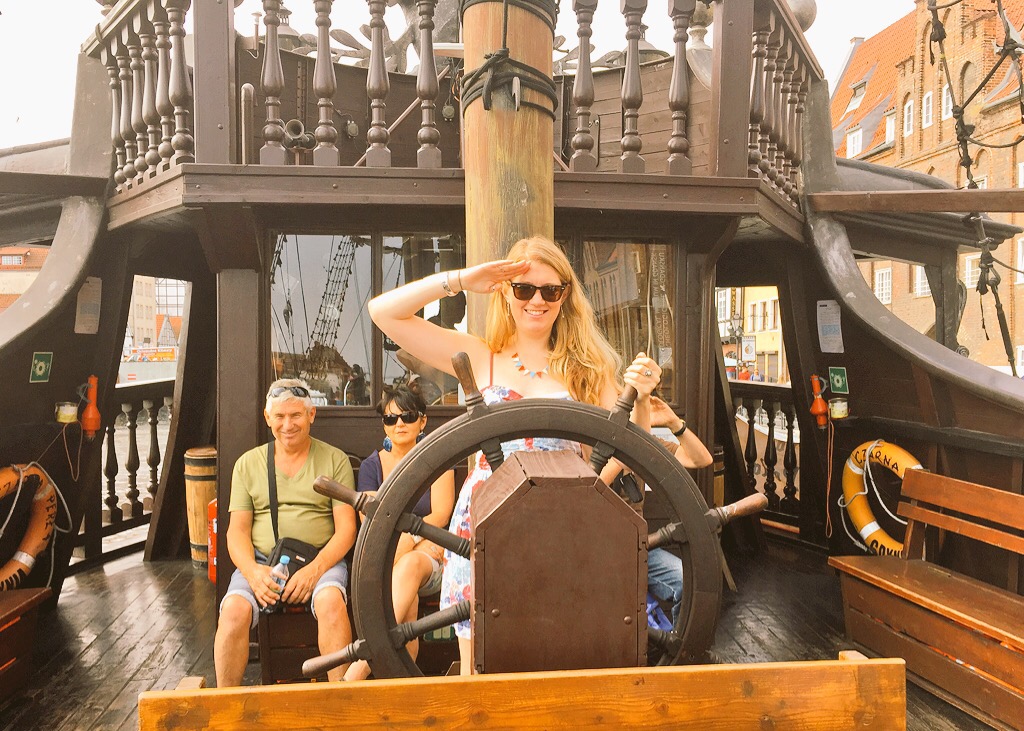 From the water the memorial looks like a large totum pole but close up you can learn more about this important island in the world’s history. The return journey takes about 2 hours and is a great way to see some of Gdansk’s famous sites from the water. The best bit live music, a singer performing some great English and Irish boating songs. 2. Get involved at the Hewelianum Centre

The Hewelianum Centre is a fun filled afternoon out, especially if you have kids. Most of the scientific exhibitions have English translations and the staff are more than happy to help and explain things to you. I learnt a few things, (that I felt I probably should know) and even had the chance to brush my teeth with a giant toothbrush and walk across a tightrope over a deathly drop! As you do!? 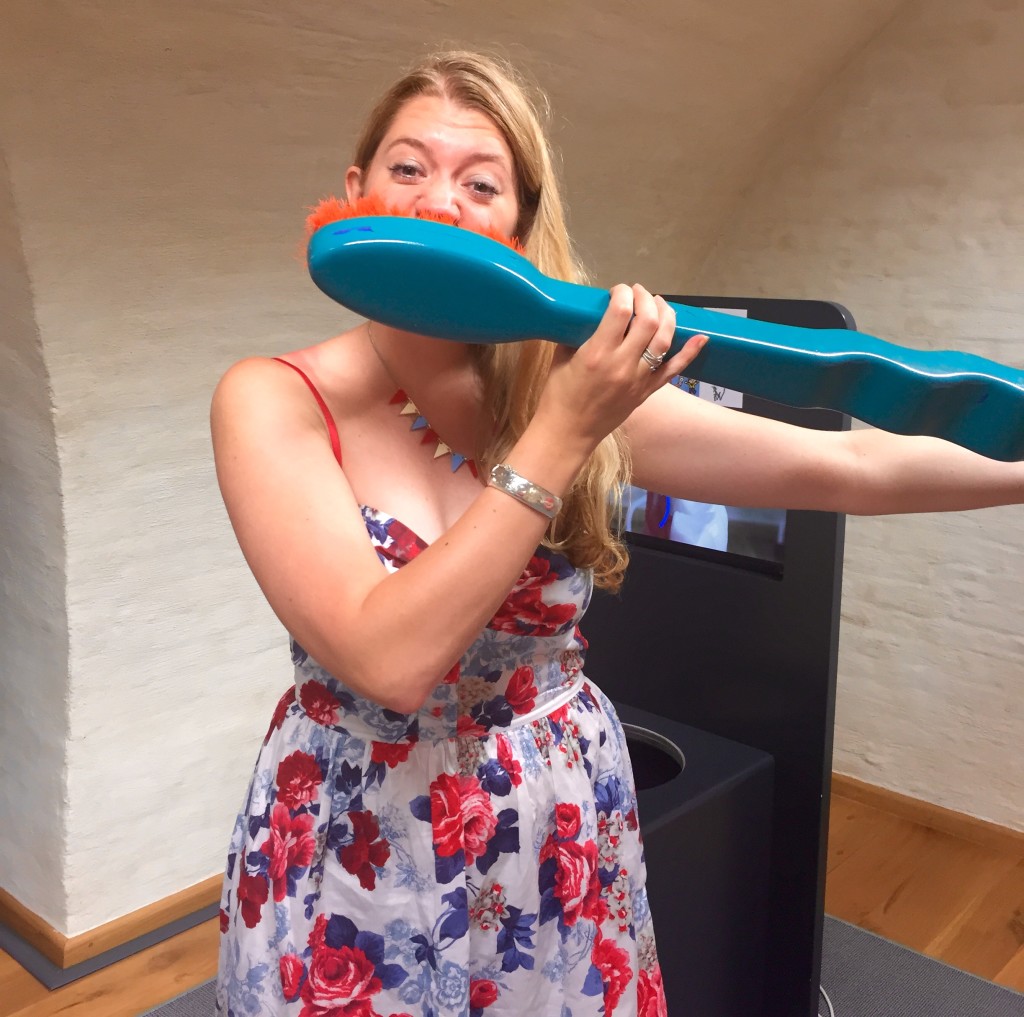 It is worth a visit just for the views over the city from the hill it sits on and over the summer has a relaxing area outside on the grass with deckchairs and giant play area for kids. 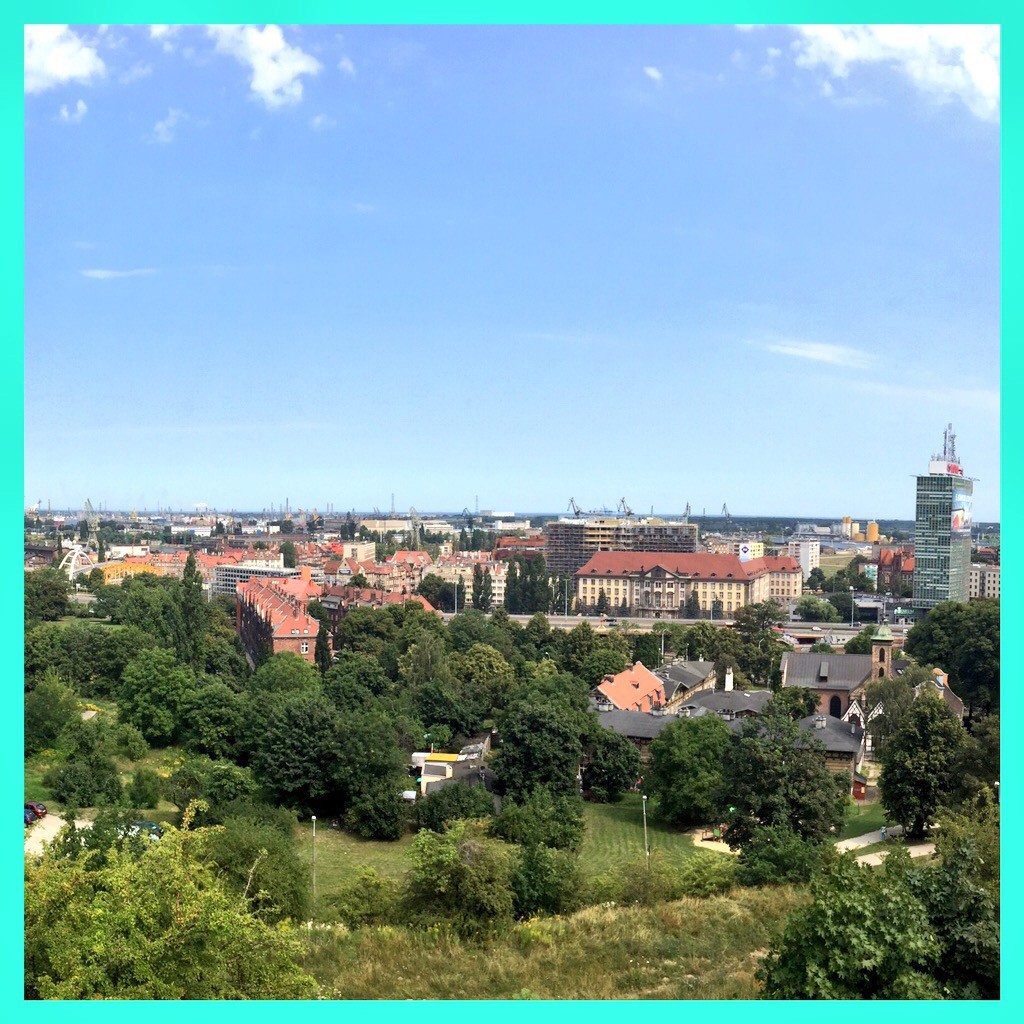 This was the most fun!! and therefore I highly recommend it to experience a football stadium like you never have before. Sadly you can’t do the Tyrolean ride when a game is going on, but even over an empty stadium it is quite an adventure. 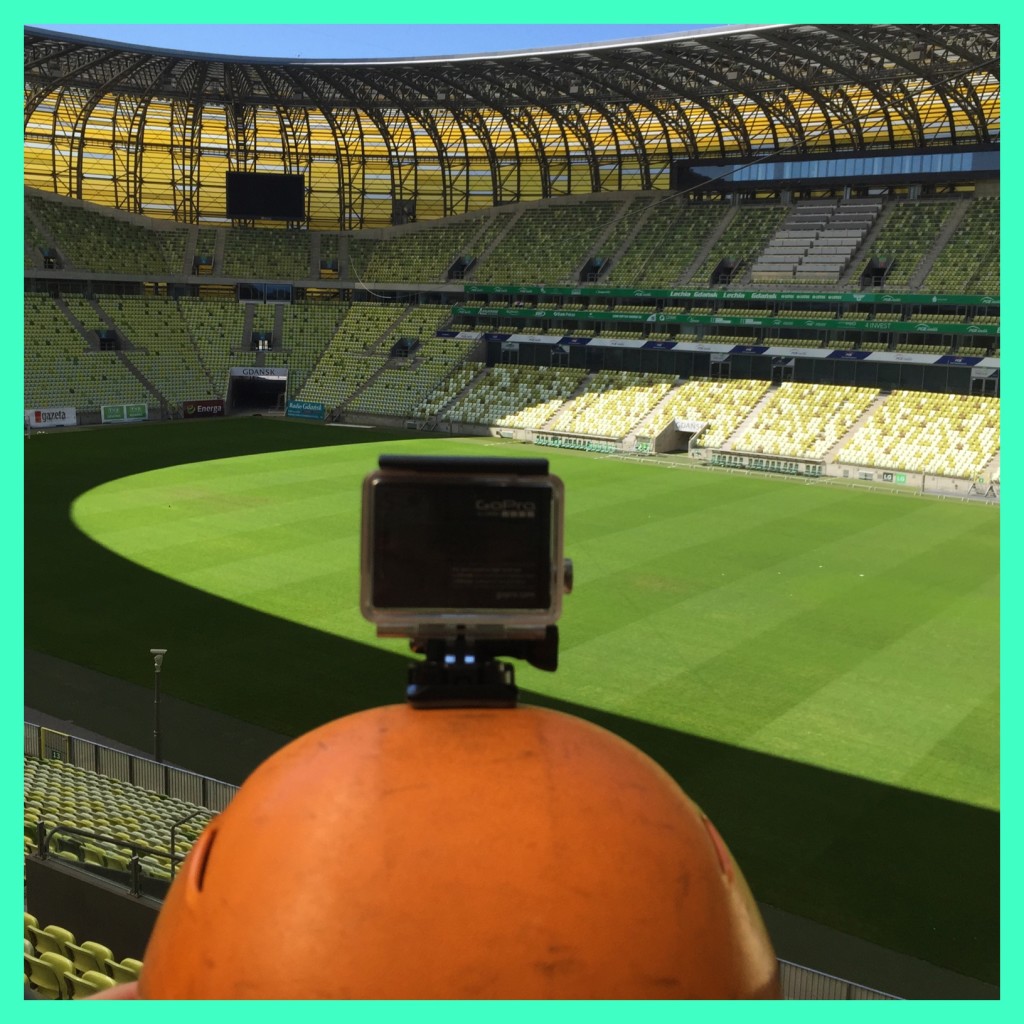 There are loads of things you can do in the Energa Arena when a match isn’t going on, from Zoltar lazer fun, a huge trampoline arena, Escape Rooms and indoor and outdoor go karting. Wowsers. Loads to keep you entertained. I’m not sure how easy the Escape Rooms would be if you don’t speak Polish but maybe they provide translations. Go-karting however is possible in any language and I’m sad I didn’t get the chance to have a go. The Tyrolean ride was more than enough fun for one afternoon though! 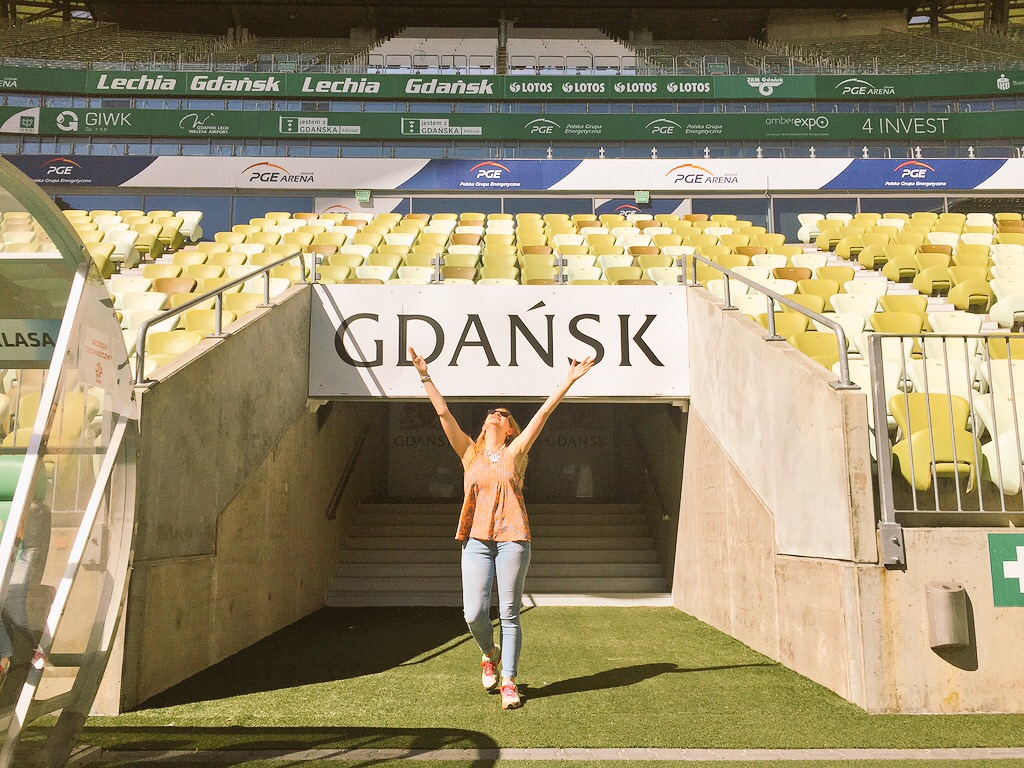 4. Take in a play at The Shakespeare Theatre

Another adventure in Polish I was intrigued to try out. The link between Shakespeare and Poland may not seem obvious but it was a hot place to visit for travelling theatres in the 17th century and so what better place to build a modern yet traditional theatre than in the centre of Gdansk. The Shakespeare Theatre opened only last year after taking several years to build and is a magnificent building, it even has a Royal welcome from HRH Prince Charles who has a keen interest in the arts at home and abroad. Loads of different spaces for meetings and events and a multipurpose theatre that can be moved around for a variety of different stage and theatre styles, including in the round and more traditional theatre and concert performances. The best bit of all though is that it is the first theatre ever to have an opening roof. Sadly when I visited it wasn’t open but it can be quickly opened or closed for bad and good weather in a matter of minutes. Wow!

I went to watch The Merry Wives of Windsor… in Polish. They had translations on a board above the stage so it was just about possible to follow the storyline while keeping an eye on the brilliant acting on the stage beneath. I’m sure there were a few jokes that went over my head, but I could tell it was a quality performance and would consider a play in a foreign language again.

My first evening was spent at a new restaurant Piwna 47, so new I don’t think it even has a website yet. I loved the decor and couldn’t help snapping away loads of photos before I had even ordered the food. I tried traditional Zurek soup, a sour sausage soup, which didn’t sound hugely appealing but I gobbled it down in record time and it definitely wasn’t the sour I was expecting. I followed with less traditional Argentinean steak for two, carved at your table. Every mouthful was delicious! 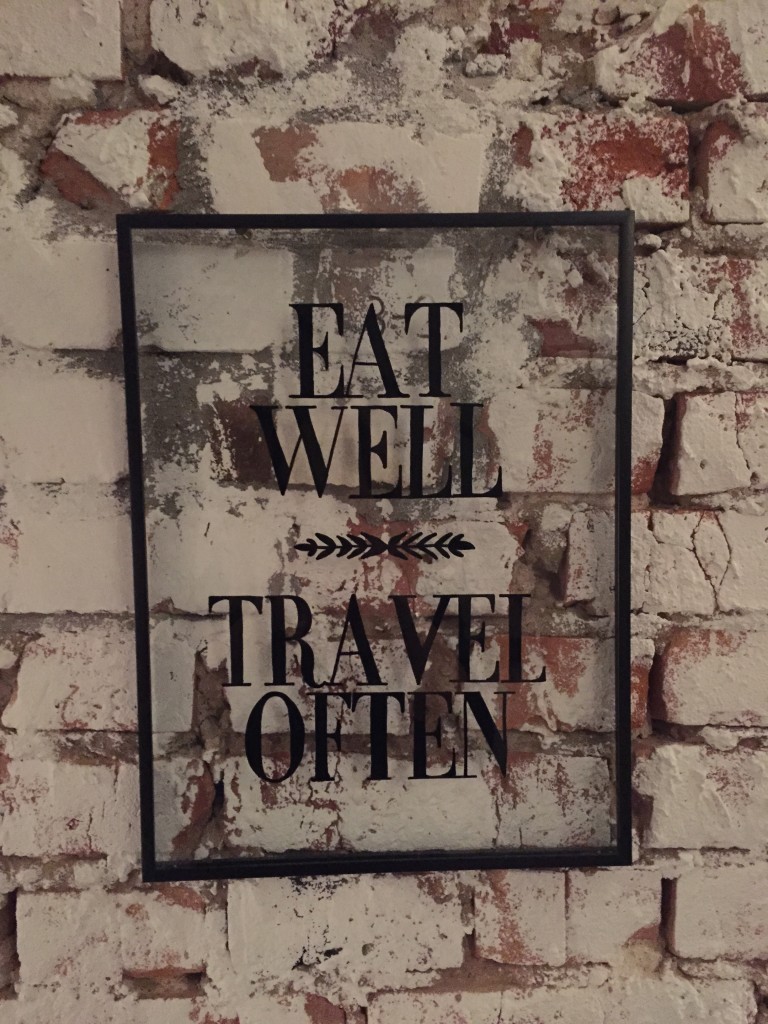 We were sat upstairs but if you’re sat downstairs or outside you can always watch the world go by on this busy street in the centre of Gdansk’s Old Town. 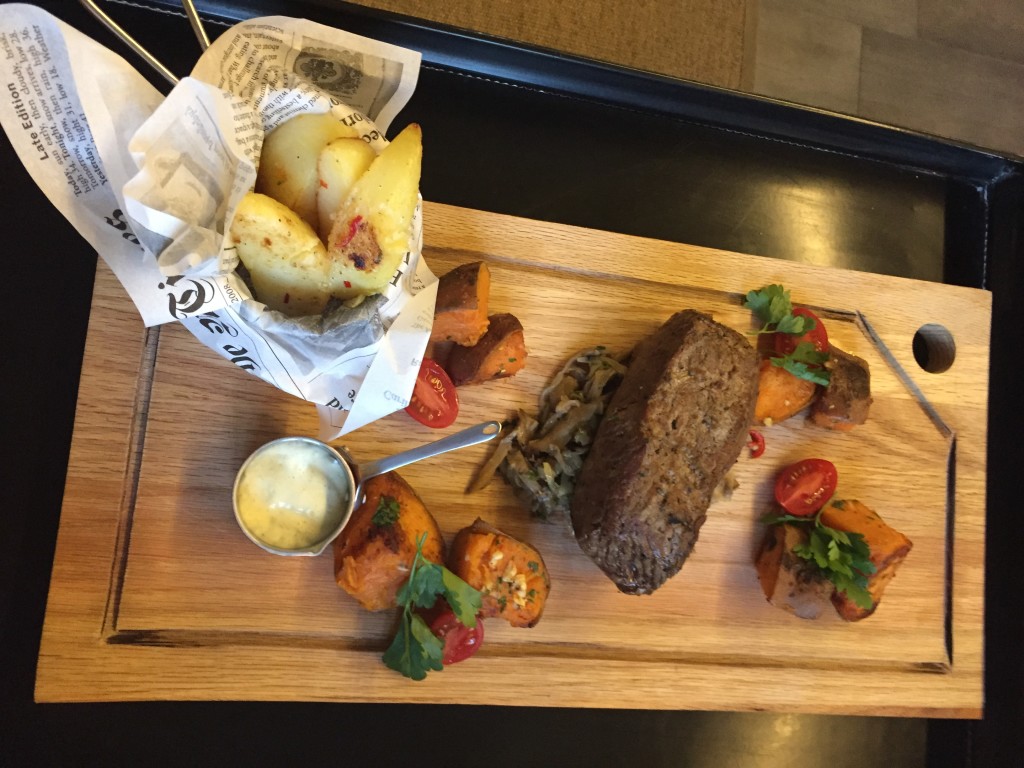 I had a brilliant weekend in Gdansk, every minute was taken up with a new adventure I barely got chance to walk the streets, but when I did get chance I was truly amazed by the architecture.

I stayed in two amazing hotels while visiting, The Dwor Oliwski Hotel and the Golden Tulip Hotel, both very different but equally welcoming and friendly. You can read my full reviews in the links.

I was in Gdansk as a guest of the local Tourist board Gdansk4U and RoomAuction.com. As always thoughts and opinions expressed above are 100% my own and I choose what I write about.